I collect and read every brain cancer book I can find. Either books about brain cancer or memoirs written by those going through the experience.  Here are my summaries of the books I have read so far.

Soon I will be adding my book to the list! 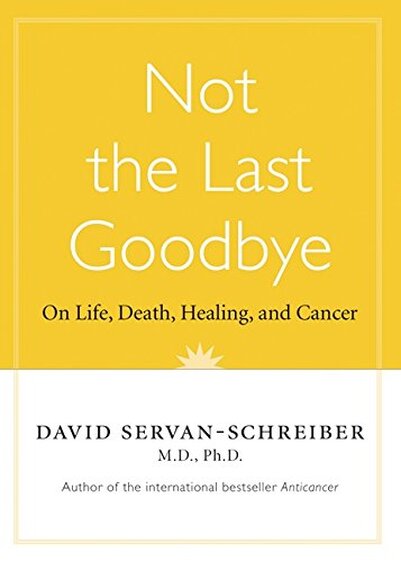 NOT THE LAST GOODBYE

Dr. David Servan-Schreiber describes his experience after the recurrence of the brain cancer he was diagnosed with 19 years earlier. When I picked up Not the Last Goodbye, I soon realized it was written by the author of the widely acclaimed book, Anticancer, which I had read many years ago. I had followed many of his recommendations on diet and staying healthy. David was a physician, university professor and entrepreneur; after the publication of Anticancer, he was also on the book tour circuit promoting his book. In Anticancer, which I highly recommend, he describes his journey after his initial diagnosis and all that he did to be healthy and survive cancer.

In Not the Last Goodbye, David acknowledges that he didn’t necessarily always practice what he preached in Anticancer. He writes: “I cared so much about promoting my ideas that I forgot to look after myself.” This struck a chord with me. Although it’s been over 15 years since my diagnosis of glioblastoma and I like to think the cancer is gone, I must continue to be mindful of the need to be healthy in all dimensions. The cancer may be gone, but its physical and mental effects linger, both from the tumour and the treatment, and I want to be as healthy as I can. Also, after my diagnosis in 2004, I tried to identify events and actions that had occurred in the preceding years that may have led to the cancer. In fact, I had a specific event in mind that I felt triggered the cancer. This book helped me believe that there is no point in regretting the past—that it makes more sense to focus on and treasure what is good is one’s life.

Not the Last Goodbye is filled with little nuggets of wisdom. The author made it clear that even though he knew that his illness was terminal, he lived every day fully and with hope. He showed me what I do not want to do, which is to ignore the most important things in life. As I have heard from many others diagnosed with brain cancer, we have a new perspective on life. For me, I tend to see the beauty surrounding us more than I did before my diagnosis. And although sitting at my desk in front of the computer is important for my work, I also know how important it is to sit amongst the trees on a hill, as this nourishes my soul and that helps me to stay healthy.

Indeed, David believed that there are many things an individual can do to be healthy in addition to conventional medical treatment. The simplest things can have profound positive effects—“spending time in a forest, on a mountain, or a riverbank brings us something that is wonderfully revitalizing…it helps us to align ourselves with the rhythm of the seasons, to find balance and healing within ourselves.” I am also mindful of the fact that every one of us has only a certain period of time to enjoy the beauty of life. I’ve come to realize that the things that used to trigger anxiety, frustration or anger are quite insignificant in the grand scheme of things. So this book really resonated with me. “We need to nourish our health, our psychological balance, our relationships with others and the planet around us. Together, all these efforts contribute to protecting us—individually and collectively—from cancer, even if there will never be a 100 percent guarantee.” David wrote Not the Last Goodbye in April and May, 2011, and it was published in his native France a month later. It went straight to the top of the bestseller lists – just in time: David died on July 24, 2011. Even to the end of his life he taught us valuable lessons about cancer, life, death and healing.

A DEADLY INTRUDER - MY FIGHT AGAINST BRAIN CANCER